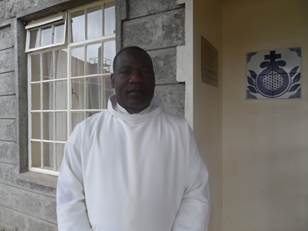 God calls us to serve him through external signs or crises and distress around us. In the case of my own vocation, everything began at the Saint John of God Hospital at Tanguiéta, in 1981, when I went to visit a nephew suffering from rabies after being bitten by a dog. Despite his serious condition, which left no hope of recovery, the Hospitaller Brothers and the carers looked after him with incredible diligence and care.

It was then that I was overcome by a particular feeling, and one question kept coming to my mind over and over again: “Why shouldn’t I do what they are doing to help your people?” After thinking it over I spoke to my spiritual director – Fr Boulot, an SMA missionary (Society of African Missions). For I had two main worries: 1) I was still a neophyte (I had only been baptised two years earlier); 2) after my baptism I read St Augustine, and this inspired me to consecrate myself to God. And for me, the only way to do this was by becoming a priest.

Father Boulot explained the different types of vocation in the Catholic Church and he showed me the life of the Hospitaller Order Brothers of St John of God. He promised that he would talk about me to the Brothers at the first opportunity. And that is how contact was established.

After staying with them a few times as an aspirant I was admitted to the novitiate of the Hospitaller Order of Saint John of God at Tanguiéta aged 21 on October 1, 1983, and I made my temporary profession on January 26, 1986.

God always calls people to a specific mission, and to perform that mission preparation is needed. And so I took a course to become a professional State-registered nurse at Afagnan. After graduating I made my solemn profession on March 8, 1993 together with Brother Olivier Atoukoté.

From 1993 to 1997 I studied at the Pontifical Salesian University in Rome and on June 20, 1997 I was awarded my Master’s degree in Education. On my return to Africa I was appointed Novice Master at the Agoé-Nyivé novitiate from 1997 to 1999.

In February 1999 I was put in charge of the “St Richard Pampuri” General Delegation of Benin–Togo as the General Delegate. From 1999 to 2001 I was also appointed Prior of the Community and the Director of the St John of God Hospital at Afagnan.

At the General Chapter of the Hospitaller Order held in Granada (Spain) in November 2000 I was elected General Councillor which gave me enormous satisfaction, but also brought many responsibilities.

The vocation of the Hospitaller Brother, following the example of Jesus and in the manner of Saint John of God, is to care for the sick with a Christian spirit, which above all else means “being deeply humane with everyone, but above all with those suffering from poverty, hunger, pain and sickness”.